The ferry is a ‘non-place’ par excellence. It is an interval between the island and the mainland that allows us to distance ourselves from both and look at them with new eyes, as an ‘existential tourist’, you might say.

Mediterranean no. 5 was born like that, on one of those sunny winter days when the long waves of the sea mirror the sky, interrupted only by the south-west wind.

It is in special weather conditions that you feel privileged to be on the deck of a ship and enjoying such a spectacle: strong wind, clear sky, rough sea and the taste of salt everywhere.

That day, under such conditions, the islet of Cerboli, off the coast of the island of Elba, stood out in the light with a particular presence, as if it had attained the absolute state of island.

It made a strong impression on me, along with the sea, with its myriad shades of colour, from emerald to muddy green.

That’s how it is with the south-westerly, an alternation of different greens and brilliant, almost dazzling whites.

When the sensation is so strong, I’m always afraid it is going to fade in my memory and so I set out to capture it in a sketch, in order not to lose that intensity.

As soon as I could I reworked it in watercolour (what better way to depict the sea?).

But then I decided to put watercolours aside, and use Indian inks instead, more intense in their colours.

I could have stopped at that, but I wasn’t satisfied yet. I wanted to find another visual equivalent to the physical sensation of the combination of salt, sea and sun.

So I created an image on sandpaper, trying to work on the harmony and continuity of the greens as if every layer of the collage would bring a little of its colour of the water to the other, like the waves of the sea.

The islet is there, in an eccentric position, present but elusive, like those important things that you glimpse as life flows by, but not so quickly as to forget them.

TO SEE OTHER SANDPAPER COLLAGES

I’ve told you this little anecdote because I hope it can bring you the dazzling light, the taste of salt and the noise of the wind on that ordinary and yet so special winter’s day on the ferry. 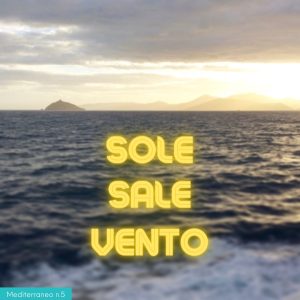 One artistic reference behind this picture is undoubtedly J.M.W. Turner, a Romantic painter given to representation of a wild nature that reflected the state of mind of the human being.

Thanks to his numerous sketches from life, he is considered a forerunner of painting en plein air and the Impressionists.

Unlike the latter, however, he focused on the emotional aspect of nature, using the images in his sketchbooks to represent the feelings stirred in him by the sight of incredible natural events. 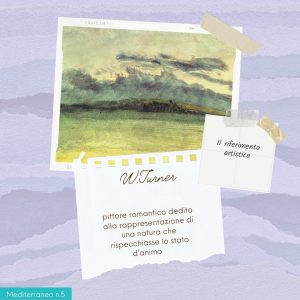 If you want to know the story behind this picture you can see it here: